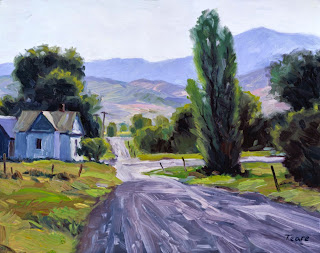 During a studio open house I conversed with a surgeon and mentioned that a medical illustrator–a former surgeon–told me that creating medical illustrations took more dexterity and concentration than surgery. Having launched into the story with little hope of backpedaling I wondered how the surgeon would react to an artist comparing painting to surgery. I began to regret my bravado. I paused for a moment and added, "of course, with painting no one dies if you make a mistake." The surgeon paused reflectively and then laughed. My potential faux pas was minimized by admitting the obvious. No one dies when a painting fails.

In the book, The Society of Timid Souls author Polly Morland explores the act of courage. She begins her book by describing a society started in the 1940s dedicated to the eradication of stage fright. Later she describes orchestral musicians and their struggle with performance anxiety. Up to 30% of musicians are afflicted with uncontrollable stage fright. Compared to other practitioners of activities like bullfighting or surfing monster waves their reaction seems excessive and out of place.

But the phenomenon of fear in the face of performance, even if not a matter of life or death, should be taken seriously. That which resides only in our minds still affects us profoundly. In his pursuit of excellence sports psychologist Christian Lattanzio evolved the following formula: performance = preparation + the state you access during the game. Likewise for artists preparation is not the only factor when we paint. Our state of mind is the other half of the equation. If we approach the easel with trepidation overwhelmed with memories of past challenges we diminish our chance of performing optimally. In this sense every painting is a record of our mental state.

Regarding lack of courage the author of The Society of Timid Souls offers many possible solutions. She recounts the examples of soldiers, relief workers, musicians, and extreme athletes who prevailed in their endeavors. Individual solutions will most likely spring from similar positive memories from our own past.

In my early years, I was a drummer in a rock band. During one of our first auditions, I began missing beats and botching critical fills. The more I panicked the worse I performed. Afterward, my band mates were deeply disappointed if not angry. Sometime after the audition, I reflected on my failure. I realized that what derailed my performance was not my preparation nor my native ability but fear. But my fear was a force that resided entirely within myself. It was under my control. This mental jujitsu of boldly labeling an interior state as pointless did its magic. I never failed an audition or performance again. I still felt anticipation as I set up my kit but my performances were free from debilitating anxiety.

I write this entry as a lecture to myself. My plein air experiences have devolved to the point where I no longer enjoy them and the results of my efforts parallel my mental state. Above is a plein air sketch (9" x 12") I did five years ago. My ability to perform is still there no doubt. I simply need to perform yet another act of mental jujitsu, realize painting is not a matter of life or death, and return to my former level of performance.