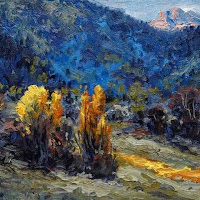 –I DON'T struggle with creative block often–but when I do it is overwhelmingly painful. It usually happens when the stakes are high, and I need to accomplish a task on a nearly impossible deadline. Due to an upcoming gallery search in Santa Fe and my largest show ever in May, I recently experienced my worst creative block yet.

To remedy the situation I decided to try Carrot.FM, an online consulting service. I recently was invited to be a consultant with Carrot but never experienced the service as an end user. Looking for a suitable consultant, I browsed the list and chose Dr. Lindsay Bira, a psychologist and life coach. I was impressed with her resume, and her background seemed right to deal with creative block.

I contacted her via the chat feature on her Carrot home page and set up a call time. At the designated hour I hit the Call button and immediately connected to Dr. Bira. The technology works great and the audio and video were flawless.

I briefly described my situation. She acknowledged that blocks occur as a natural rhythm of the creative process. I told her my current stress was more than the usual flux. She suggested that artists get creative block when our position between the poles of boredom and stress get skewed too far toward stress. I told her about the upcoming opportunity in Santa Fe, and we agreed that it was upping my anxiety.

Dr. Bira inquired if my motivation had recently dropped and I admitted it had basically disappeared. She suggested finding anchors to the present moment. I told her I was incorporating meditation as a part of my process, but it had failed to calm my nerves. She asked if I was experiencing an inability to envision a positive future and if I had experienced a past negative event similar to the one I feared might happen in Santa Fe. I admitted I had a negative experience with a gallery that potentially resembled the upcoming event. She suggested I was projecting the past negative event onto the future event.

She asked if there was a positive event in the past that gave me the feeling of success I would like to experience in Santa Fe. I told her how I had an agent in New York that believed in my illustration career and provided the confidence I lacked. She suggested I find ways to replicate that experience with the upcoming event. I liked the idea, and the gears immediately began turning. She suggested a variety of solutions including forming a meet-up group and broadening social connections.

While I work on social relationships she suggested I remain in the moment by lowering expectations and mentally escaping from stress via mindfulness. She also suggested using paradoxical intention–the restructuring of my painting ritual–to break out of my excessive expectations.

Overall I found the coaching/consultation session not only productive but enjoyable. I had overcome creative block on my own in the past but this consultation was a time-saving jumpstart. Dr. Bira is a gifted coach and consultant, and I found myself wishing I had more time to spend. Previous to the call, I wondered if I would engage at the level necessary to have a productive exchange of ideas. But the interaction far surpassed a simple telephone conversation. The added input of body language and facial expressions was very helpful to establish a solid rapport. I can now say without equivocation that such internet consultations are equivalent to a personal visit.

Carrot.FM will be an awesome resource for those in the consulting professions. However, they do need to tweak a few things. They need to add a wish list to their app. They also need to add additional pages to the homepages for more space to describe why users should use our services (being able to add images would be nice, as well as a rating system). Above all, they need to add more categories. I'm listed as a Tutor and Life Coach, neither of which describe my services very well. They should add Creative Consultant and Painting Instructor, as well as many other categories (such as Social Media Consultant).

If you missed Carrot's free consulting day, I will keep you informed should another opportunity arise.