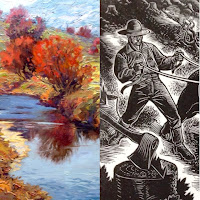 AS ARTISTS why do we express ourselves the way we do?

When I was younger I played in a rock band. One evening we were playing to a full house at the aptly named Rogues Inn in Manhattan, Kansas. It was the usual crowd and they were hard to please. We picked a song from one of our own compositions–one that had the vaulting power of the progressive rock of that era. We dove into the tune and found our way through the oft practised song.

But that night something was different. A musical fusion took place that transcended our abilities. When we finished we were met not with the usual smattering of applause but with dead silence. Every head was turned and staring at the stage. After a few heartbeats wild cheers and thunderous applause erupted.

Unlike my bandmates, being a musician was a pastime for me. I really wanted to be an artist. As we basked in the adulation that night I thought that's the kind of power I want to infuse into my art one day.

My career since then has tried to embrace that kind of vaulting power–but in visual form. Our art can be many things but it is good to know our prime motivations. One reason I like the art of woodcut is that it easily captures the raw power of the artist's mark. I now see that many missteps in finding a clear artistic path have been from combining two paradoxically exclusive elements–poetry and power.

Artists such as John Twachtman fused their art with a poetic response to nature by using subtle nuances of value and color. Others, such as Lawren Harris, pursued the power of the visual image using divergent contrast and the clash of saturated color. Poetry and power are two ends of a continuum. You can have a mixture of both but you cannot have a mixture of one hundred percent of each quality. You have to compromise. You have to understand the emotional response you are trying to evoke and add the right amounts of each quality to express your intention.

An element of great art is harmony of intent. Not knowing where the emotional intent of your painting is on the poetry/power continuum gives a mixed, and therefore, weak message. Even though viewers may not consciously detect conflict they will react with ambivalence and vacillate between the two emotional poles.

Note: The Lawren Harris book below is pending but I'm enthused to get a copy as I think he's the best of the Group of Seven. Let me know if you have seen a copy.