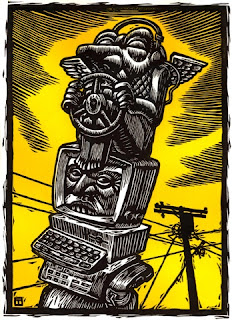 IS ART the most important aspect of human culture? Or is it of no importance at all? Many might deem such extreme perspectives unnecessary claiming the importance of art lies somewhere in between. But author Elizabeth Gilbert, in her latest book Big Magic, states that art is both absolutely essential and completely meaningless.

Her willingness to wrestle with such paradox evolved from an interview she conducted with singer/songwriter Tom Waits. He told her his extreme views of creativity, embracing the classic titanic struggle of the tormented artist, gave way to a more reasonable and healthier attitude as he saw his children effortlessly enjoy the creative process. His kids didn’t go through convolutions of loathing and self-doubt as they created–they simply enjoyed the process. After adopting his children’s approach Waits described his songs as intracranial jewelry, a term indicating a more philosophical, and humble, approach to his creations. The term allowed him to distance himself from his songs by acknowledging that they are, after all, just songs.

I found this attitude refreshing and it allowed me to accept the next concept in the book–that artist’s have no right or entitlement to anything. Surprisingly, this was a new concept to me. After all, aren’t artists responsible for all the bright and beautiful things in the world? Wouldn’t earth be a dreary place in the absence of our work? Yes, but if we didn’t do it someone else would. Artists are no more special than anyone else on the planet.

This is perhaps obvious to most. But artists have strange backgrounds and are often acculturated by an educational process that deems them worthy of special consideration. In my case such entitlement was entirely subconscious. Like most people I felt a duty to embrace the tenets of humility and egalitarianism. Yet there smoldered within me an ember of entitlement placed there by an equally entitled art establishment–which I unquestioningly accepted.

So what has changed with my new attitude? I now no longer feel belittled when I’m not accepted into a show, or am rebuffed by galleries, or ignored by collectors. I’m now fully conscious that I’m entitled to nothing and subject to the same vicissitudes of life as anyone else in any other profession. Fate will smile on me, or storm, depending on factors that are largely out of my control. Such an attitude is liberating and frees me to relax into my work. It allows me to treat both my successes and failures as expressions of the same chaotic force. I can simultaneously be in awe of a well painted passage yet realize it is, after all, just a smudge of paint.

I often work late at night when I’m completely exhausted and regret I’m unable do my best work. So what? I often make great effort to finish a painting only to have it rejected from a juried show for which it was specifically painted. So what? These are problems of little importance.

So what is important? The work, the actual process of creating, the finished paintings, the minor breakthrough after a long season of frustration, the small miracles that, for reasons unknown, allow me to paint beyond my ability. Those things are important.

But as important as those things are they can never overshadow the importance of good relationships, good friends, and a good heart. Fostering those traits are the most essential of all. And paradoxically, as I free myself from entitlement, I enjoy more fully those simple pleasures.