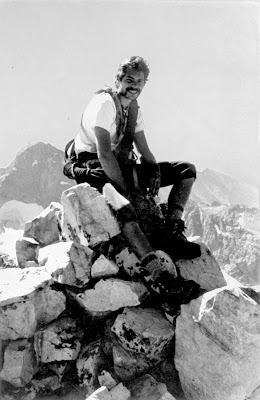 In 1981 my friend Joe Hebert invited me to join him in an ascent of Devil's Bedstead, a prominent peak in the Sawtooth Mountain range in Southern Idaho. The photo at right was taken by Joe at the summit, which was a vertigo inducing space with the footprint of a large automobile. Off the south side was a sheer drop at the bottom of which was an emerald lake nestled in a rock strewn valley. The beauty was as refreshing and austere as the mountain air. The only thing lacking was my plein air kit. And, more importantly, an ability to use it.

I discovered this photograph while going through some old reference files. What struck me about the photo was the look of total confidence in my eyes. At the time I was enrolled in illustration at Utah State University and working as a layout artist at an animation studio in Salt Lake City. I was making my way in the world. But I couldn't paint. I could barely draw and I wonder now how the studio managed to keep me on for three seasons without firing me.

Yet I envy that look of total confidence and wonder where it went. I have to remind myself that it was the look of total confidence. It was the confidence of the naive. I admire it but realize that since then I have accumulated many strengths that more than compensate for that look. But seeing the photo did cause me to shake my head with sadness at much of life with its mundane obligations, uninspired fellow-travelers, and all that weighs us down and pointlessly consumes our lives.

But the things I've learned far outweigh the things I've lost. Otherwise I would have abandoned the artistic journey long ago. The photo reminds me that the exuberantly optimistic boy is still alive. He has taken a few blows and is worse for wear but he still lives. He has taken the guise of an aging man but continues to thrive despite the ongoing wear to his camouflage. That optimism, that exuberance so common to youth, is who we are . . . still.