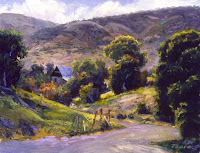 FORGETTING to make painting fun is another way to create a mental block. This often happens when artists press too hard toward a desired goal. I once was so intent on getting a series of paintings done I began to work frantically rather than calmly toward my goal. I mistook my misguided intensity for virtue. As I became more and more frenzied the magic that lends beauty to art evaporated. Rather than relaxing and taking a deep breath I increased my frantic pace. This had an escalating negative effect. The painting entered a death spiral as I lost my original vision.


A good painting is a manifestation of the mental state you were in when you painted it. A poor painting is detached from that mental state. This detachment means there is little relationship between the artist and the final result. The painting is ambiguous, unfocused, and generic. What you intended to communicate is lost.

So how does a painter recover the state of mind that leads to good painting? You must recover the calm that promotes a direct link between intent and final result. One way to do this is to recapture the fun that originally enticed you to pursue art in the first place.

Looking at how children enjoy art we see them reveling in the joy of spontaneous creation. Their work is naïve, lacking informed decision that is the hallmark of mature creativity. They have few voices inside their heads criticizing or directing their work. But their enjoyment is pure. Back in my art school days I remember the art students that improved very quickly. Like children they drew and painted unhindered by internal criticism. They created fearlessly and without reservation. Due to their furious pace these artists quickly acquired the technical skills needed to paint well. They became the envy of the class and the focus of the teachers' attention. However since these students lacked the internal critic most students struggled with few of these artists ultimately developed the refined sense of taste necessary to foster an individual, unique style.

Some artists with the often bedeviling internal critic slowly managed to accumulate the skills to express their artistic vision. A few surrendered to internal criticism and gave up artistic pursuits entirely.

But what would happen if an artist with a demanding internal critic (the force that develops artistic sensitivity and taste) learned to suspend the often withering voice of such a demanding master? Such suspension would allow an artist to progress quickly technically while holding the demanding critic in reserve. If one could learn to switch between the role of childlike exuberance and the role of demanding master both virtues could be fostered simultaneously.

Here is a news flash for every artist, student or otherwise: learning to paint, and refining your process, takes a lot of time and work. But if we can learn to make it fun, while retaining and fostering a critical eye, we combine the best of two worlds and our progress will be fast and rewarding. This may remain a lofty and somewhat paradoxical goal. But worth considering as we strive to develop our talents.