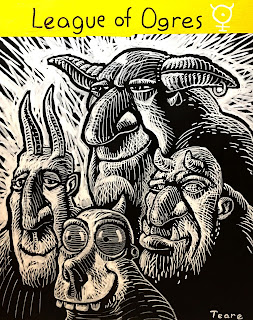 –IT is a good idea when having a show to write a brief press release. Press releases are prewritten articles to intrigue journalists into investigating more or to use as copy for their respective publications. The main point is to convey important details while entertaining the reader. The more unusual the show the easier it is to find a unique angle to promote the exhibit. A good rule of thumb is don't be boring.  After you write the basic text, edit out any detail that isn't informative or doesn't have entertainment value.

The copy for my upcoming Persistence of Paradox show is more sophisticated than I might otherwise have used because I feel the show will attract a different kind of gallery attendee. If I were writing for a landscape show my language would be simpler. The name or subject of the show sets the tone and the readers' expectation. Below is my final press release:

Persistence of Paradox simultaneously explores the visual complexity of Brad Teare's graphic novel Cypher and the significance of its quirky, Jungian mythology. Teare uses the medium of acrylic markers (the markers graffiti artists use) to develop and expand the surrealist imagery revealed in the original book. Teare discovered that by using white markers on canvas painted with black acrylic paint, he could replicate the look, and more importantly, the state of mind, of working in scratchboard and woodcut–the original mediums of the comic book.

"The original graphic novel was comprised of dream imagery that I stitched into a comprehensible structure," Teare says. "The challenge was to focus the narrative while retaining the overall surreal, symbolic content."

The exhibit continues that impulse by visually exploring the mystery of life–with all its paradoxes. Some of the comic pages are meticulously painted onto canvas at ten times the original size. Smaller paintings are tributes to original characters and include Salvador Dali, M.C. Escher, as well as a cast of archetypal icons from Femme Fatale to the League of Ogres (a crew of motley Hades-dwellers).

Although the show consists primarily of works on canvas, included are two sculpture/assemblages that pay homage to iconic scenes in the series. Teare has attached QR codes to many of the artworks and attendees can use their phones to access additional surrealist and explanatory video.

Cypher originally appeared in Heavy Metal magazine and was later published as a graphic novel by Peregrine Smith Books. It was critically acclaimed and received accolades from the Spectrum Annual, Fantagraphics Books, as well as Simon & Schuster's Comics Encyclopedia. His work has appeared in the New York Times, Paradox Press, as well as many other comics anthologies. While living in New York, he illustrated books by Alice Walker, James Mitchener, Ann Tyler, and many others. He now lives in Providence, Utah.